Posted at 18:32h in Blog by Debra Meyerson and Steve Zuckerman
5 Likes

As we all continue to grapple with our “new normal”, one thing we must accept is that change is even more frequent and inevitable than ever before.  In that spirit, we want to share important news…

Why? — you might ask.  Several months ago a book was published with the name “Stroke Forward”.  Rather than co-exist and cause confusion in the years ahead as we continue to grow our organization and impact,  we decided to “re-brand” from Stroke Forward to Stroke Onward.    It’s a seemingly small change, but we’ve come to appreciate that our new name embodies an important distinction.  As a friend who gave us feedback observed: there are so many ways to move onward– forward sounds more linear – and the process of rebuilding after stroke is anything but linear.  So Stroke Onward it is!

With in person gatherings essentially impossible, the 24-hour Virtual Teach-In that leaders of Aphasia Access began designing two years ago was remarkably well-suited for our changing times.  Board President Liz Hoover, Executive Director Todd Von Deak (both on Zoom with us) and their team led a fantastic event. 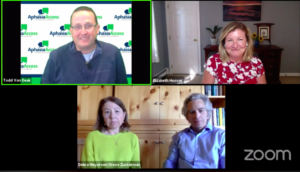 We were thrilled to participate on June 24th, alongside more than 70 others who shared incredible stories of impact and cutting edge work to support those who live with aphasia. We shared a bit of our story, and some lessons about how understanding and rebuilding identity can be a tool to help survivors more frequently “look forward, not back”.  We also shared some early data on work we’re doing at Boston University and MGH-IHP to understand how our message might be built into the degree granting programs for medical, therapy and other practitioners.  We hope that doing so  will enhance the perspective and resources for the next generation of professional caregivers. 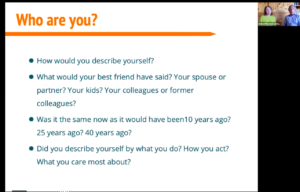 Approximately 300 participants logged in at some point during the Teach-In marathon — most were speech language pathologists who lead and support aphasia programs worldwide. Presentation content ranged from research studies, virtual  aphasia programs, mentored student research, program ideas to support community participation, and more. Attendees and presenters tuned in from the United States, Canada, the United Kingdom, Ireland, Denmark, Australia, New Zealand and India.  The Aphasia Access community is truly incredible — highly expert, passionate, and exceptionally welcoming of new people and new ideas — and we’re thrilled to have been able to join in.

June was Aphasia Awareness Month and we used social media to do our part in helping more people understand this incredibly frustrating disability that affects about ⅓ of all stroke survivors and more than 2 million people in the United States alone.  Learn more about Aphasia at Aphasia Access,  The National Aphasia Association or The American Stroke Association.

As the calendar shifts to July, in honor of July 4th Independence Day in the US, we’re focusing on broader themes of independence.   In Identity Theft: Rediscovering Ourselves After Stroke we wrote quite a bit about the emotional trauma of losing independence following a stroke and the struggle to recover capabilities and regain it.   We also wrote about how reality, identity and independence can change for each of us, as our family experienced stroke together (Chapter 9 – Stroke is a Family Illness.) And maybe most importantly, we shared how our family’s  very notion of independence changed in important ways as we learned that independence doesn’t have to mean “going it alone”.  Co-existence and co-dependence can actually be a powerful aspect of independence.  We still tear up every time we think about our daughter Sarah’s talk delivered to her high school community two years after the stroke (that story begins Chapter 9) — she, on her own, figured out that true strength doesn’t mean “gutting it out alone”, but rather the ability to be vulnerable, and ask for and accept help from others.  As she stated at the end of her  talk, “As every athlete knows — no matter how much you can bench press, you always need a spotter.”

As we Stroke Onward, we will increasingly share our message through social media.  We have launched ourselves as @StrokeOnward on Facebook, Instagram, Twitter, and LinkedIn.  Future activity on these handles will focus on sharing information, resources, ideas and activities to complement Deb’s social media and those associated with her book, Identity Theft: Rediscovering Ourselves After Stroke which you can find here.    Given the different focus of our two social media efforts, we hope you will consider following both.

With appreciation for your support, collaboration and interest in our work, we offer best wishes for safety and health during these changing and challenging times.

Patrick Brannelly is the Director of Partnerships & Business Development at the Alzheimer’s Disease Data Initiative (ADDI), a non-profit organization that was launched by Gates Ventures in November 2020. Prior to ADDI, Pat was a Managing Director at the Rainwater Charitable Foundation, where he led a consortium that sought to accelerate the development of new treatments for neurodegenerative disorders. Earlier in his career, Pat worked in early-stage brain health technology ventures and as a management consultant in the US and Europe. He is a former Assistant Professor of entrepreneurship and strategy at California State University, Fresno. A frequent member of boards and committees within the neuroscience community, he currently serves as a Steering Committee member of the OECD’s Neuroscience-inspired Policy Initiative. Pat holds a BA in Psychology from Harvard College and an MBA with Distinction from Harvard Business School. As the father of two young kids, he spends his free time building forts, watching animated films, and running a non-profit taxi service.

Tony Stayner is the Managing Director of the Excelsior Impact Fund, a donor advised fund that represents contributions from multiple families and invests to create the world we want for future generations.  He is a member of the Toniic T100 impact investor network and helps lead impact investing activities at SV2, for which he was honored to receive the 2019 Laura Arrillaga Andreessen Social Impact Award. He has used his experience as a Silicon Valley software executive to mentor numerous social entrepreneurs.  He also serves as the  Board Chair of the Pacific Institute and as a Board Member of Water.org.  Tony’s MBA is from Stanford’s Graduate School of Business and JD is from the University of California at Berkeley’s School of Law (he attended Harvard Law School during his third year of law school on an exchange program).  Tony graduated Phi Beta Kappa with an A. B. in Economics and Mathematics from the University of California at Davis.  He lives in the San Francisco Bay Area with his wife, Beth Cross, and has three adult children.

In addition to her service on the board of Stroke Onward, Karen Jordan has been involved with JDRF since 2008, when her daughter Ali was diagnosed with autoimmmune Type 1 Diabetes.  She is a member of the International Board of Directors, is Chair of the Research Committee (which provides strategic guidance and governance for a grant portfolio of over $350MM), and serves on the Audit & Risk Committee.  She also serves on the T1D Fund Board, a venture philanthropy fund with over $200MM under management.  She is a member of JDRF’s Northern California Chapter Board  and serves as the Chapter’s Research Chair.  She is a member of the Joint Steering Committee for the JDRF Northern California Center of Excellence at Stanford and UCSF.  She is the inaugural recipient of JDRF’s John Brady Award for Innovation.

Her previous non-profit work includes service on different boards including, among others, Starlight Children’s Foundation, Stanford GSB Alumni Association and the Portola Valley School District.  She was a member of the group who founded Summit Prep, a charter school profiled in Waiting for Superman.  She currently serves on the Stanford Medicine Community Council and the Stanford Athletics Board.

Karen earned her B.A. in Economics-Business from UCLA and her MBA from the Stanford Graduate School of Business.  She has completed TPW’s year-long program on strategic philanthropy.  She has worked as an investment banker and with the Mayor’s Office in Los Angeles.

Debra Meyerson is an author, advocate, and a professor at Stanford University Graduate School of Education. Prior to her stroke in 2010, Debra’s academic work focused on feminism, diversity, identity, and organizational change;  a full academic resume and publication history is included in her Stanford Faculty Profile. Debra’s most recent book,  Identity Theft: Rediscovering Ourselves after Stroke (Andrews McMeel Publishing, 2019) helps stroke survivors and those closest to them navigate the emotional journey that she has found very difficult—and rewarding. In addition to her work with Stroke Onward and her ongoing rehabilitation therapy, Debra currently serves on the board of the Pacific Stroke Association (PSA),  the BU Sargent Clinical Advisory Board, and the ACT for Aphasia Stakeholder Advisor Board (University of Pittsburgh ). Debra received her B.S. and M.S. from M.I.T. and a Ph.D. in Organizational Behavior from Stanford University.

In addition to his work at Stroke Onward, Steve Zuckerman remains employed part time as President of Self-Help Federal Credit Union and and Senior Advisor to Self-Help’s west coast operations, which he launched in 2006. Self-Help is a nationally recognized Community Development Financial Institution (CDFI), whose mission is to create and protect ownership and economic opportunity for underserved communities. Steve’s prior work experience includes almost 15 years with McCown De Leeuw & Co, a private investment firm, and consulting with Bain and Co. Throughout his career he has served on many nonprofit boards supporting economic, social and health justice, including Tides Foundation, Positive Coaching Alliance, and Renaissance Entrepreneurship Center, currently serves on the BU Sargent Clinical Advisory Board and the ACT for Aphasia Stakeholder Advisor Board (University of Pittsburgh ). Steve earned a BA from Yale University and an MBA from the Stanford Graduate School of Business.

Debra and Steve live in the San Francisco Bay area, and have three adult children.

Jodi Kravitz has always worked at the intersection of social mission and innovation. Before being recruited to help launch Stroke Onward, Jodi worked for almost a decade with FIRST, an award winning  nonprofit STEM inspiration program. Her responsibilities with FIRST LEGO League included program operations and partner relationships in more than 80 countries. She began her career working in strategic planning and other key roles for multiple national healthcare providers. Jodi has volunteered extensively for public television and other causes from her home on the seacoast in New Hampshire. Jodi received an MBA from Vanderbilt and a BA from Yale University.

Courtney L. Cooper has worked for community college students on campus and nationwide. Through her work as President of the Student Senate for California Community Colleges (SSCCC), representing 2.1 million students, Cooper fought for system-wide changes through the legislature and the Board of Governors to improve student lives. During her tenure, the SSCCC helped over half a dozen laws to get passed, including AB 1995 for students with housing insecurity. In 2017, Courtney was awarded Woman of the Year: Rising Star by Senator Jim Beall for her legislative advocacy on behalf of the disabled, LGBTQ+, and former foster youths. Courtney received her associate degree in Intercultural Communication from Foothill College and is now in her final year completing her BA in Business Management at Menlo College, with a concentration in Entrepreneurship and Innovation. She plans to continue her work in advocacy for the disabled, especially for underserved communities.

Flannery O’Neil, MPH received her Bachelor of Arts from American University and a Master of Public Health from A.T. Still University. She has worked in healthcare and public health for more than 15 years in both the non-profit and government sectors. Her areas of expertise include communications, data, public health program development and management, and organizational leadership. Most recently, she worked in stroke and cardiac quality improvement for the American Heart and Stroke Association and served in leadership roles for a local public health agency.

Since experiencing an ischemic stroke in 2017, she has worked to advocate both personally and professionally for the needs of people experiencing stroke including founding and leading two stroke support groups.

She lives in Louisville, Kentucky with her husband, Andrew and their two dogs.