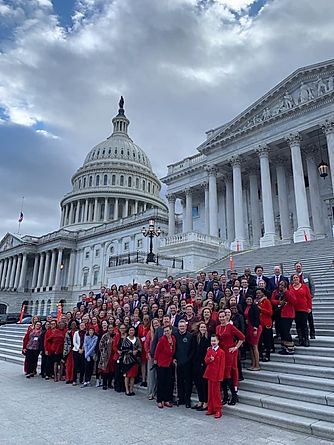 Posted at 17:19h in Blog by Debra Meyerson 0 Comments
1 Like

Steve and I just returned from 3 days in Washington DC with the American Heart Association/American Stroke Association.  About every two years they “storm the hill”, bringing advocates with a passion for heart health to meet with house and senate members who can help drive legislation on priorities for the AHA/ASA.  About 150 volunteers from around the country joined AHA staff for education on Wednesday, Capitol Hill meetings on Thursday, and debriefing/planning on Friday.

It was truly inspiring to see the passion of so many people who have been deeply affected by various forms of heart disease, including stroke, and how they have turned their difficult situations into an opportunity to help others – most notably, future generations.

We helped pitch legislation to address the three issues that were the focus of this year’s trip:

It was a busy day on Thursday, with five congressional meetings.  We joined a group of about 10 Californians for meetings with healthcare staff from both Senator Kamal Harris’ and Dianne Feinstein’s offices.  Steve and I then met with just one or two AHA staff with staffers working for Rep. Mark DeSaulnier (CA-11, East Bay), Anna Eshoo (CA-18, peninsula – US!), and Jimmy Gomez (CA-34, central LA).  Pleased to say that our CA representatives are, to a person, very supportive of the AHA positions, and some are sponsoring bills that address them.

The trip was inspiring.  We learned a lot.  Hopefully we made a small difference.  And it definitely helped us think more deeply about the kind of policy change efforts we might want to drive through Stroke Forward, as we expand the activities of our nonprofit in the months ahead.

Thanks for following our travels and activities, and stay tuned for more.

Debra Meyerson and Steve Zuckerman co-founded Stroke Onward in 2019, and currently serve as volunteer co-chairs of this nonprofit organization.  Stroke Onward’s mission is to ensure stroke survivors, families, and caregivers have the resources they need to successfully navigate the emotional journey critical to rebuilding their identities and rewarding lives.

Debra Meyerson is an author, advocate, and a professor at Stanford University Graduate School of Education. Prior to her stroke in 2010, Debra’s academic work focused on feminism, diversity, identity, and organizational change. Debra’s most recent book, Identity Theft: Rediscovering Ourselves after Stroke (Andrews McMeel Publishing, 2019) helps stroke survivors and those closest to them think about the process of rebuilding identities after trauma, and navigate the emotional journey that she has found very difficult—and rewarding. In addition to her work with Stroke Onward and her ongoing rehabilitation therapy, Debra currently serves on the board of the Pacific Stroke Association (PSA), the BU Sargent Clinical Advisory Board, and the Acceptance Commitment Therapy (ACT) for Aphasia Stakeholder Advisory Board (University of Pittsburgh). Debra received her B.S. and M.S. from M.I.T. and a Ph.D. in Organizational Behavior from Stanford University.

Steve Zuckerman is Debra’s husband, carepartner, and an unnamed co-author of Identity Theft.  He leads the development of Stroke Onward and remains employed part-time as President of Self-Help Federal Credit Union and Senior Advisor to Self-Help’s west coast operations, which he launched in 2006. Self-Help is a nationally recognized nonprofit whose mission is to create and protect ownership and economic opportunity for underserved communities. Steve’s prior work experience includes leadership roles in both private equity and consulting. Throughout his career, he has served on numerous nonprofit boards supporting economic, social and health justice, including Tides Foundation, Positive Coaching Alliance, and Renaissance Entrepreneurship Center, and currently serves on the BU Sargent Clinical Advisory Board and the ACT for Aphasia Stakeholder Advisory Board (University of Pittsburgh). Steve earned a BA from Yale University and an MBA from the Stanford Graduate School of Business.

Patrick Brannelly is the Director of Partnerships & Business Development at the Alzheimer’s Disease Data Initiative (ADDI), a non-profit organization that was launched by Gates Ventures in November 2020. Prior to ADDI, Pat was a Managing Director at the Rainwater Charitable Foundation, where he led a consortium that sought to accelerate the development of new treatments for neurodegenerative disorders. Earlier in his career, Pat worked in early-stage brain health technology ventures and as a management consultant in the US and Europe. He is a former Assistant Professor of entrepreneurship and strategy at California State University, Fresno. A frequent member of boards and committees within the neuroscience community, he currently serves as a Steering Committee member of the OECD’s Neuroscience-inspired Policy Initiative. Pat holds a BA in Psychology from Harvard College and an MBA with Distinction from Harvard Business School. As the father of two young kids, he spends his free time building forts, watching animated films, and running a non-profit taxi service.

Tony Stayner is the Managing Director of the Excelsior Impact Fund, a donor advised fund that represents contributions from multiple families and invests to create the world we want for future generations.  He is a member of the Toniic T100 impact investor network and helps lead impact investing activities at SV2, for which he was honored to receive the 2019 Laura Arrillaga Andreessen Social Impact Award. He has used his experience as a Silicon Valley software executive to mentor numerous social entrepreneurs.  He also serves as the  Board Chair of the Pacific Institute and as a Board Member of Water.org.  Tony’s MBA is from Stanford’s Graduate School of Business and JD is from the University of California at Berkeley’s School of Law (he attended Harvard Law School during his third year of law school on an exchange program).  Tony graduated Phi Beta Kappa with an A. B. in Economics and Mathematics from the University of California at Davis.  He lives in the San Francisco Bay Area with his wife, Beth Cross, and has three adult children.

In addition to her service on the board of Stroke Onward, Karen Jordan has been involved with JDRF since 2008, when her daughter Ali was diagnosed with autoimmmune Type 1 Diabetes.  She is a member of the International Board of Directors, is Chair of the Research Committee (which provides strategic guidance and governance for a grant portfolio of over $350MM), and serves on the Audit & Risk Committee.  She also serves on the T1D Fund Board, a venture philanthropy fund with over $200MM under management.  She is a member of JDRF’s Northern California Chapter Board  and serves as the Chapter’s Research Chair.  She is a member of the Joint Steering Committee for the JDRF Northern California Center of Excellence at Stanford and UCSF.  She is the inaugural recipient of JDRF’s John Brady Award for Innovation.

Her previous non-profit work includes service on different boards including, among others, Starlight Children’s Foundation, Stanford GSB Alumni Association and the Portola Valley School District.  She was a member of the group who founded Summit Prep, a charter school profiled in Waiting for Superman.  She currently serves on the Stanford Medicine Community Council and the Stanford Athletics Board.

Karen earned her B.A. in Economics-Business from UCLA and her MBA from the Stanford Graduate School of Business.  She has completed TPW’s year-long program on strategic philanthropy.  She has worked as an investment banker and with the Mayor’s Office in Los Angeles.

Jodi Kravitz has always worked at the intersection of social mission and innovation. Before being recruited to help launch Stroke Onward, Jodi worked for almost a decade with FIRST, an award winning  nonprofit STEM inspiration program. Her responsibilities with FIRST LEGO League included program operations and partner relationships in more than 80 countries. She began her career working in strategic planning and other key roles for multiple national healthcare providers. Jodi has volunteered extensively for public television and other causes from her home on the seacoast in New Hampshire. Jodi received an MBA from Vanderbilt and a BA from Yale University.

Courtney L. Cooper has worked for community college students on campus and nationwide. Through her work as President of the Student Senate for California Community Colleges (SSCCC), representing 2.1 million students, Cooper fought for system-wide changes through the legislature and the Board of Governors to improve student lives. During her tenure, the SSCCC helped over half a dozen laws to get passed, including AB 1995 for students with housing insecurity. In 2017, Courtney was awarded Woman of the Year: Rising Star by Senator Jim Beall for her legislative advocacy on behalf of the disabled, LGBTQ+, and former foster youths. Courtney received her associate degree in Intercultural Communication from Foothill College and is now in her final year completing her BA in Business Management at Menlo College, with a concentration in Entrepreneurship and Innovation. She plans to continue her work in advocacy for the disabled, especially for underserved communities.

Flannery O’Neil, MPH received her Bachelor of Arts from American University and a Master of Public Health from A.T. Still University. She has worked in healthcare and public health for more than 15 years in both the non-profit and government sectors. Her areas of expertise include communications, data, public health program development and management, and organizational leadership. Most recently, she worked in stroke and cardiac quality improvement for the American Heart and Stroke Association and served in leadership roles for a local public health agency.

Since experiencing an ischemic stroke in 2017, she has worked to advocate both personally and professionally for the needs of people experiencing stroke including founding and leading two stroke support groups.

She lives in Louisville, Kentucky with her husband, Andrew and their two dogs.